Dr. Ian Davis (OH ’95) has been announced as the winner of the prestigious Old Haileyburians Association (OHA) Medal. The medal was awarded for the 11th time at the Founders Day assembly, held today in Aikman Hall at Keysborough. Ian passed away in late 2018 from Motor Neurone Disease. Ian’s wife, Melissa, mother, Carol, brother Bradley (OH 2013) and school mates Dave McLennan (OH ’95) and Ben Pearson (OH ’95) were in attendance at the Assembly. The award was presented by OHA Senior Vice President, Brad Hyde (OH ’82). Ian graduated from Haileybury in 1995. He obtained a Bachelor of Medicine & Surgery from Flinders University in 2006.  He won a number of awards throughout his medical training and was Dux of his year, achieving first class honors. His career commenced at  St Vincent’s Hospital where he was actively engaged with teaching junior doctors and medical students

In 2011 at the age of 33, Ian was diagnosed with Motor Neurone Disease.   Frustrated at the time, at the lack of public awareness or campaigning for increased funding into research, he began actively engaging with the local media, to raise awareness and funds for research in MND. He created a beer – Cavalier Courage and rode a tandem bike ride along the east coast of Australia to ensure his message was heard.

In early 2014, Ian was forced to give up his work as a medical doctor due to his ailing health. After the birth of his son Archie in September 2014, Ian was energized to create the Cure for MND Foundation (or Fight MND as it is now known), with the explicit purpose of finding a cure for the disease. He then partnered with Neale Daniher and together they were a powerhouse in their fight for a cure.  Their relentless dedication to the cause of raising awareness and funding for research has been inspirational to all around them, and to MND sufferers across Australia.

In their first 2 years as an organization, Cure for MND raised over $20 million, with 92c of the dollar going directly to research, and caring for those suffering with MND right now in Australia.     Ian was able to bring clinical trials to Australia so that for the first time, Australian patients have access to developing treatments that they never had before. The unprecedented funding for MND research has completely changed the landscape of MND research in Australia, and brought about a sense of urgency, and a community of scientists who are now collaborating to deliver cutting edge, world class science.

In an era where we encourage our students to have a strong sense of social justice it is truly fitting that the 2018 OHA Medal be awarded to a compassionate individual, one who courageously and selflessly put others before himself. 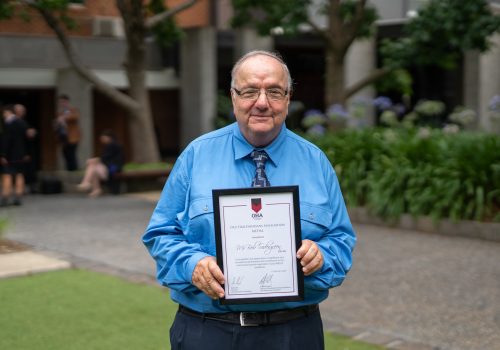